Nestled just below University City and tucked away just north of the arterial Baltimore Avenue stretch, West Philadelphia’s Cedar Park neighborhood is reminiscent of a bygone era. With century-old Victorian architecture looming large over the tree-lined streets and a quaint community feel evocative of the old days, Cedar Park offers great food, great recreational opportunities, and an affordable segue into home ownership in a perennially blooming area of West Philadelphia.

Cedar Park is a primarily residential neighborhood with large, spacious homes and a bustling business corridor along Baltimore Avenue. Most homes were built between 1895 and 1920 as the neighborhood began to expand in size when the streetcar lines were completed. As accessing the neighborhood from Center City and the surrounding suburbs grew, more apartment buildings and housing options were constructed.

The neighborhood occupies a small slice of the southern edge of West Philadelphia, bound by Kingsessing Avenue to the south, Spruce Street to the north, 46th Street to the East and 52nd Street to the West. Like the other sub-neighborhoods that make up the bottom of West Philadelphia, the lines are somewhat blurred and hardly formalized. Cedar Park, though, is a bustling stretch of low-key and unique eateries, shops, breweries, and establishments that ooze with the charm and character of the residents who frequent them.

Before the neighborhood was even habitable, it had been outlying farmland, some three and a half miles from the city center. With the advent of horse-drawn trolleys in 1850 and electric streetcars in 1892, the Cedar Park neighborhood immediately became a viable option for those with business downtown who sought the peace and tranquility found outside Center City. 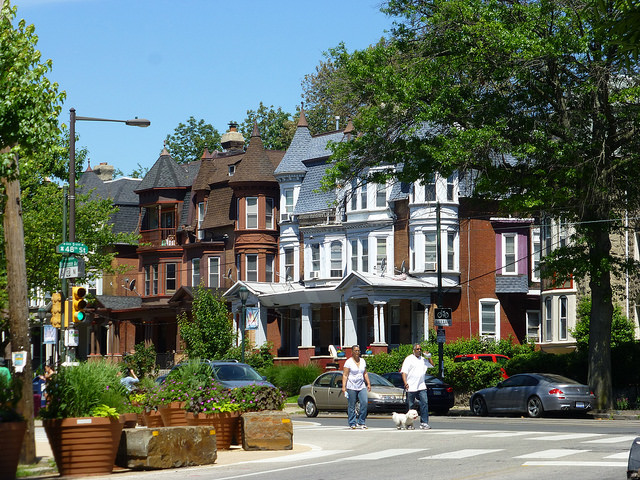 Notable for the tree-lined avenues filled with Queen Anne architecture and the trolley tracks that run the length of Baltimore Avenue, Cedar Park is home to a diverse population of immigrants and native Philadelphians alike; the result is a rich display of food, sound, and culture throughout the area. The area is especially notable for the large Jamaican and Caribbean population; if you’re looking for pan-African and Caribbean cuisine, you’re surely in the right place.

Sitting in the shadow of Center City in vibrant, verdant West Philadelphia, the Cedar Park area is great for students, commuters, and anyone looking for a strong community, a slower pace, and a beautiful neighborhood with open space and an abundance of great food. Does this sound like something you’re looking for? Let our team here at Copper Hill find your dream home in Cedar Park or beyond.